My new walking tour, The Man Who Invented Sherlock Holmes, is happening on 20 October in London. Book tickets now:

Walk through the London of Arthur Conan Doyle and Sherlock Holmes – two fascinating men whose lives were shaped by the streets of this fascinating, and often lawless, city. Find out how Arthur Conan Doyle created the world’s most famous fictional detective, and how Sherlock grew into a literary phenomenon. The walk will begin at Regent’s Park and end near Covent Garden. 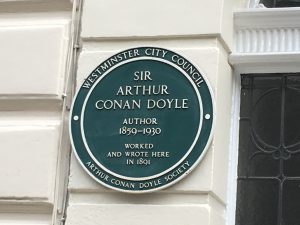 Manage Cookie Consent
This site uses cookies and other tracking technologies to assist with navigation and your ability to leave comments, analyse your use of our website, assist with our social media promotional efforts, and provide content from third parties.
Manage options Manage services Manage vendors Read more about these purposes
Cookie choices
{title} {title} {title}